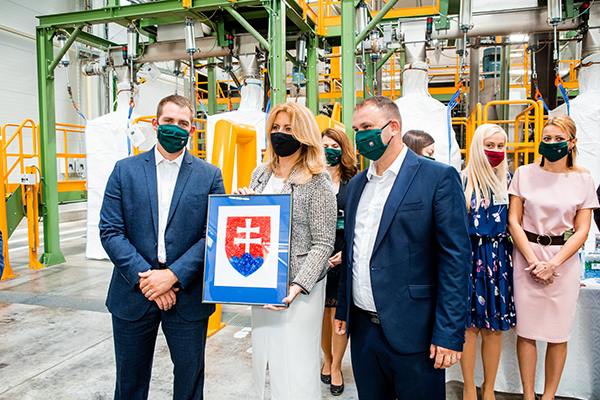 All across Europe, Green Group recycling companies are recognized as key players in reaching national recycling targets and contributors to the circular economy.

Her Excellency, Zuzana Čaputova, President of the Slovak Republic, was welcomed to Ekolumi recycling plant on Wednesday, 29th of July 2020. Accompanied by Advisor to the President, Mr. Norbert Kurilla, the delegation visited the plant and learned about the innovative PET sorting technologies employed there and the important contribution Ekolumi brings to achieving the national recycling targets.

Ekolumi representatives also took the opportunity to talk about how the company can contribute to Slovakia’s faster movement towards circular economy. Following a revitalization of an old industrial park, amounting 13 million euros after being integrated in Green Group, one of the most important recycling parks in Europe, Ekolumi is now fully equipped to cover and process all PET quantities placed on the Slovak market.

The technological process in Ekolumi includes the sorting, grinding and washing of 40.000 to/year used plastic bottles, which are further transformed into 30.000 to/year of valuable raw materials (PET flakes). By making more efficient use of available resources, these processes also bring an important contribution to CO2 emissions reduction by up to 75% on the PET supply and production chain.

Investments estimated at 20 million euro will continue at Ekolumi with the development of new industrial capacities for processing the raw materials into finished products such as PET strap and rPET granules.

Part of a two-day tour in the central Slovakian region of Banská Bystrica, the visit of President Zuzana Čaputova to Ekolumi is also a recognition for the company as a positive example of environmental, social and economic sustainability in the region.